So I had a date last week during the week, at Mosman, bit of an event because I don’t go over the Bridge so much these days.  Afterward I dropped down from the steep ridge that Military Road follows, to the pretty harbour beach, Balmoral (surf beach for the under threes).  I had a nostalgic and quality fish and chips from the Bottom of the Harbour fish and chip shop, which I think has been there about 20 years, loyally taking cash only and reminding some of us of scandalous tax avoidance schemes from the days of when…

MG xx
Sydney escort who does both sides of the Bridge

This week I could see from my balcony the tops of two incredibly tall masts rising up out Sydney Cove.  I couldn’t see what they belonged to so walked down yesterday to have a look.  Coming round the West facing edge of Mrs Macquarie’s chair, looking out across the current Opera on the Harbour set for West Side Story, was an enormous ketch.   I took a snap, including the dinghy in the foreground on the left for scale.

I searched the web when I got home for “maxi cruising ketch”. After a bit of clicking around I discovered that this is Aquijo, the largest ketch in the world at 85 metres. She is currently cruising the South Pacific and was most recently visiting New Zealand. Her masts and rigging were designed in New Zealand and she was built in the Netherlands in 2016.

I don’t want to be boorish about boats, but this was pretty special.

A couple of links:

At the end of Victoria Street, where the road ends and becomes a paved pathway a little lane way joins up with the path. It’s a dead end that meets the last apartment blocks on St Neot’s Avenue (which you can get to only by sandstone stairway). It’s a charming part of the Potts Point neighbourhood. A local wit has added some cats to the traffic sign in the lane way.

And this is a view of the lane way with the sign in place (well it’s a bit obscured in the hedge), looking across to the City. It’s not the best photo of all time but it’s still a lovely evening outlook.

One of my routine evening walks involves a circuit of the area down by the Finger Wharf at Woolloomooloo.  At the moment it’s especially nice because summer has brought out the jasmine.  There is a great hedge of it running down one side of the McElhone Stairs at the end of Victoria Street and it’s a heavy summery scent which is just beautiful. 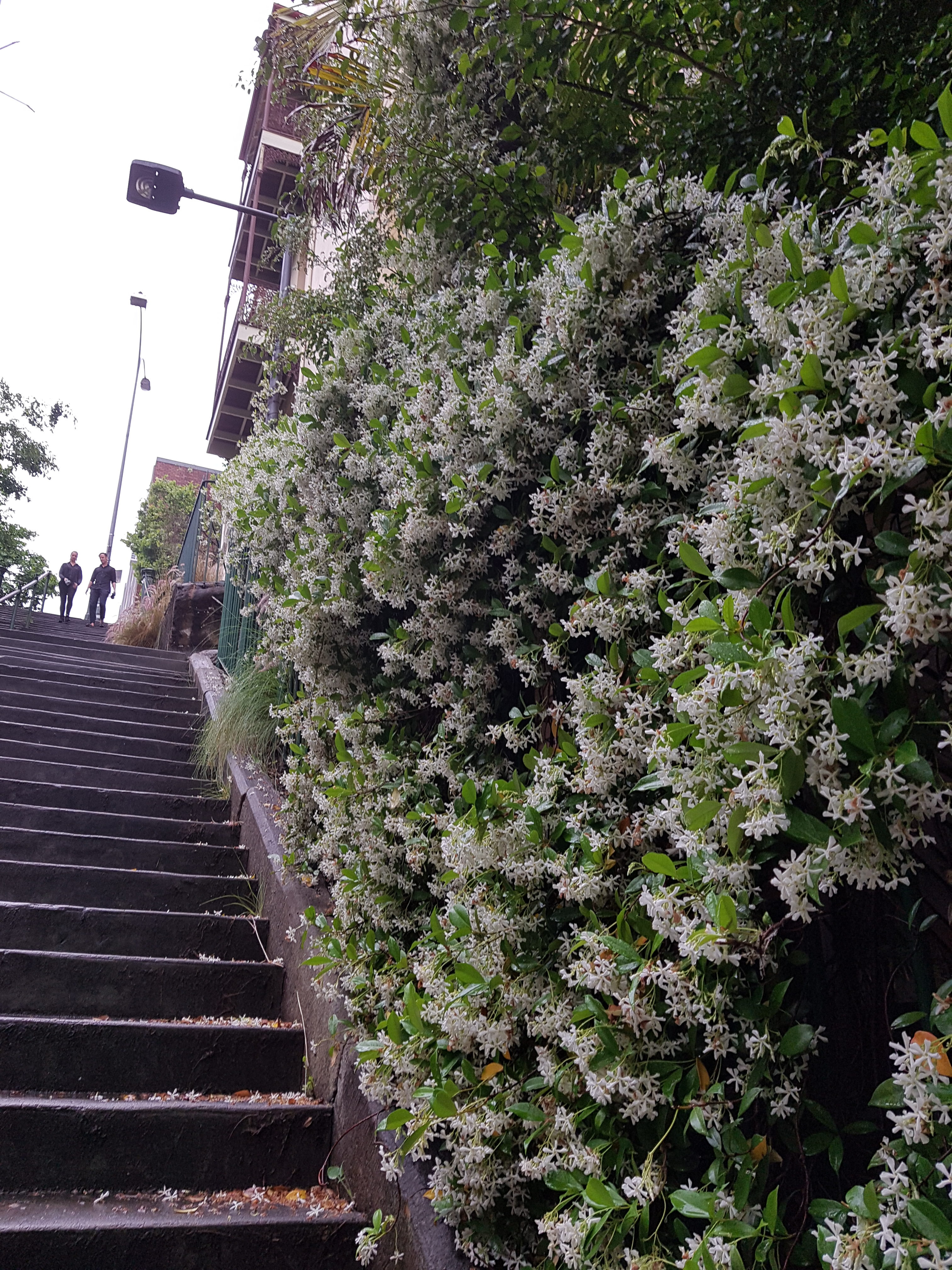 There is a always a set of sculptures on display along the boardwalk adjacent to the Finger Wharf.    According to the labels next to them they come from a commercial “art bank”.   The display changes every six months or so.  There is one new I like especially.  It reminds me of the symetry in a shell or the inside of a flower. 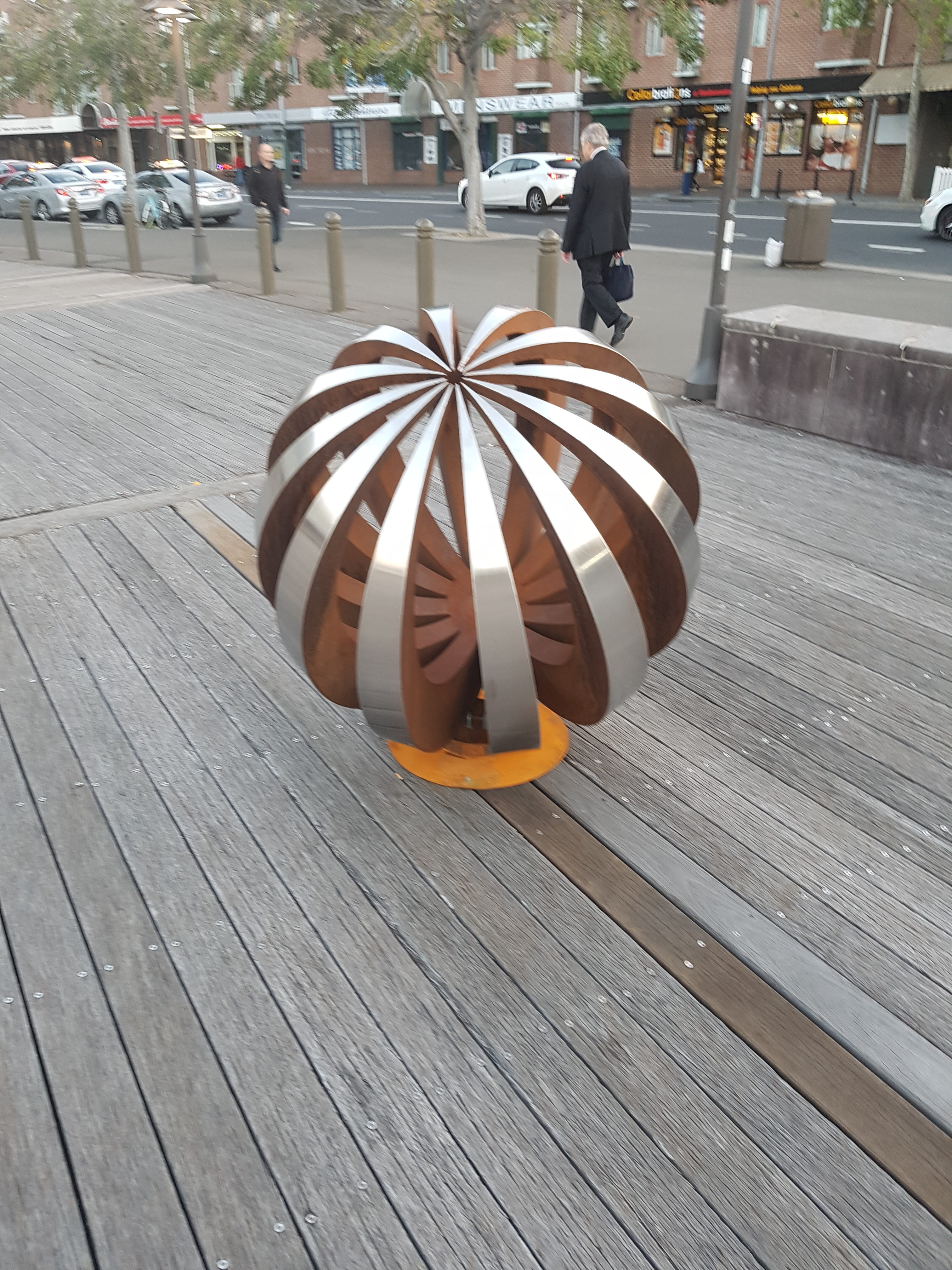 Then sometimes, just when you are minding your own business on your evening walk, a huge floating resort rounds the point in front of you and cruises down the harbour, towering over everything. 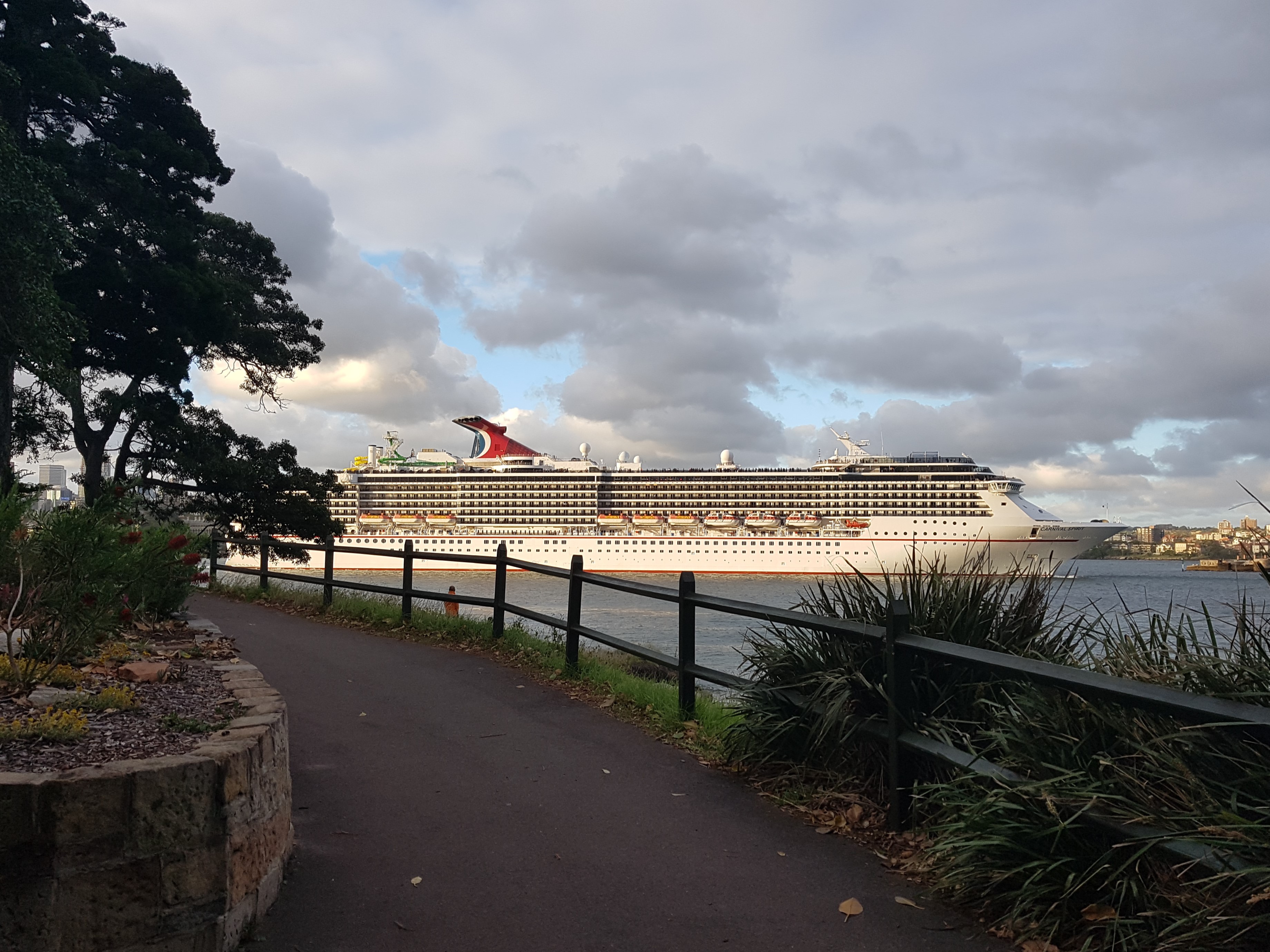 I am including here a couple of selfies I found in my dropbox files that haven’t made it to the website before now. 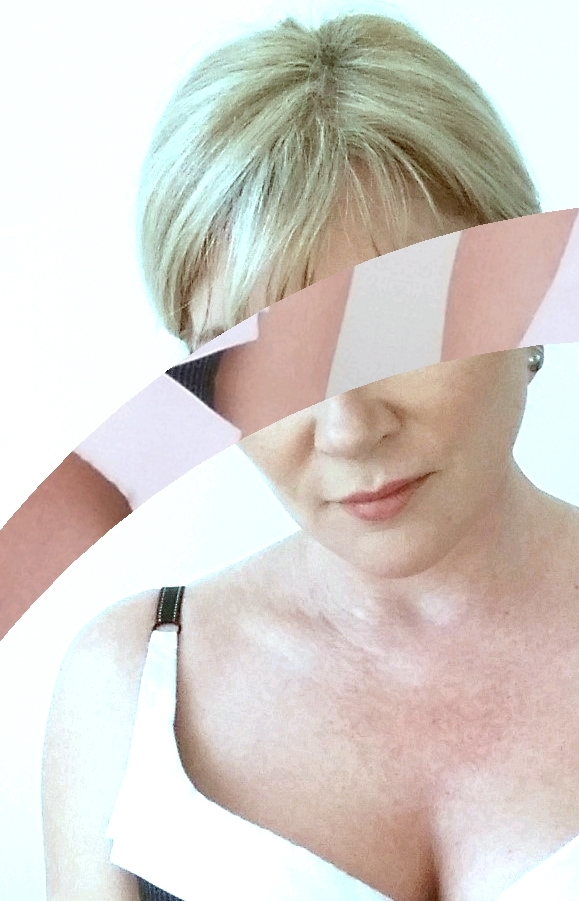 I have a couple of favourite walks I do between commitments and just to unwind.  Because I am so central in Kings Cross I am spoilt for choice.  Yesterday I took two photographs: one of the foreshore walk that I take down to the Opera House, and the other of a typical back street walk I do through Paddington. 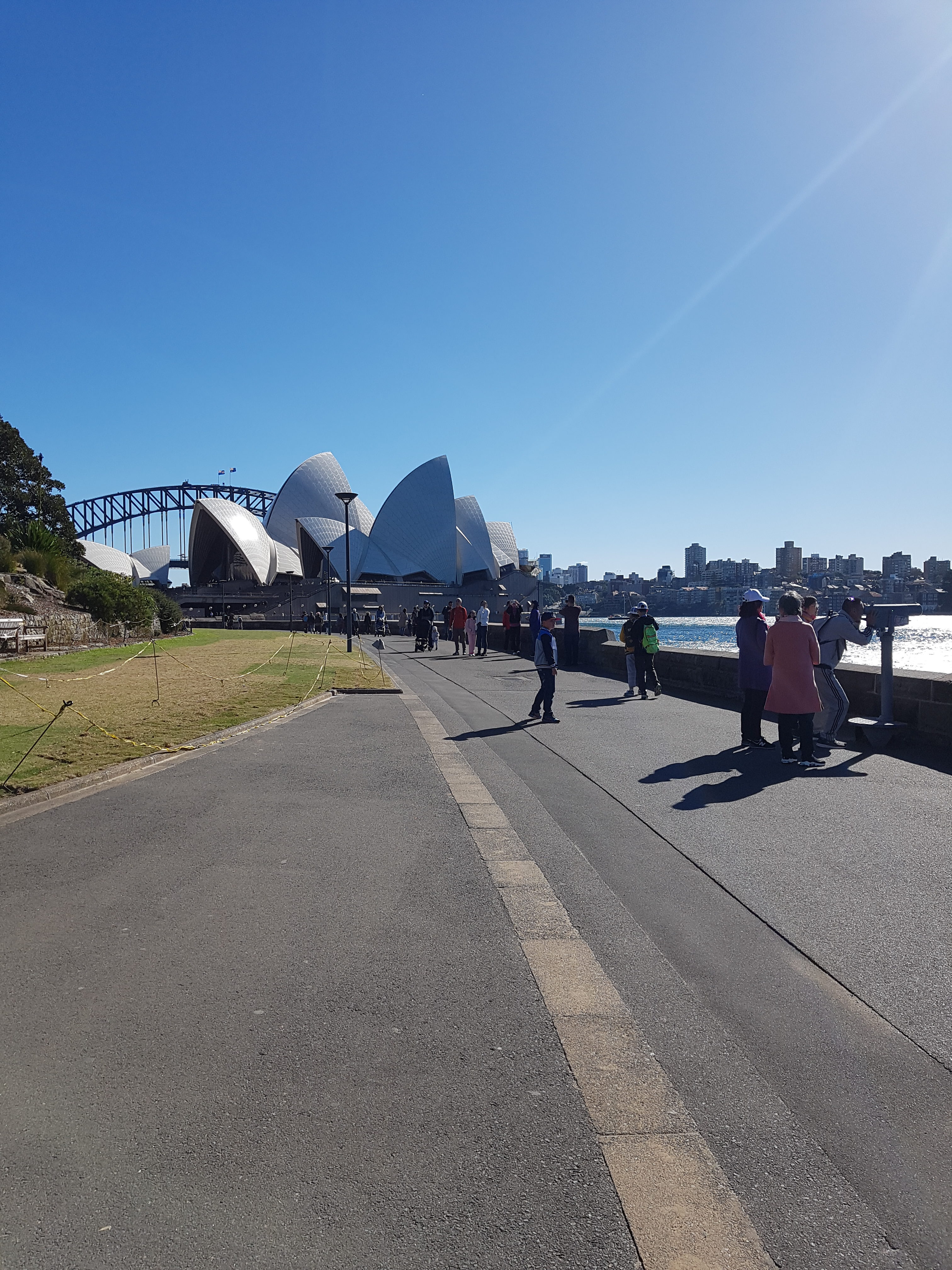 Lots of tourists enjoying themselves!  Even more of them I think, because it’s school holidays.  I am regularly asked to take photos for visitors, not everyone has a selfie stick. 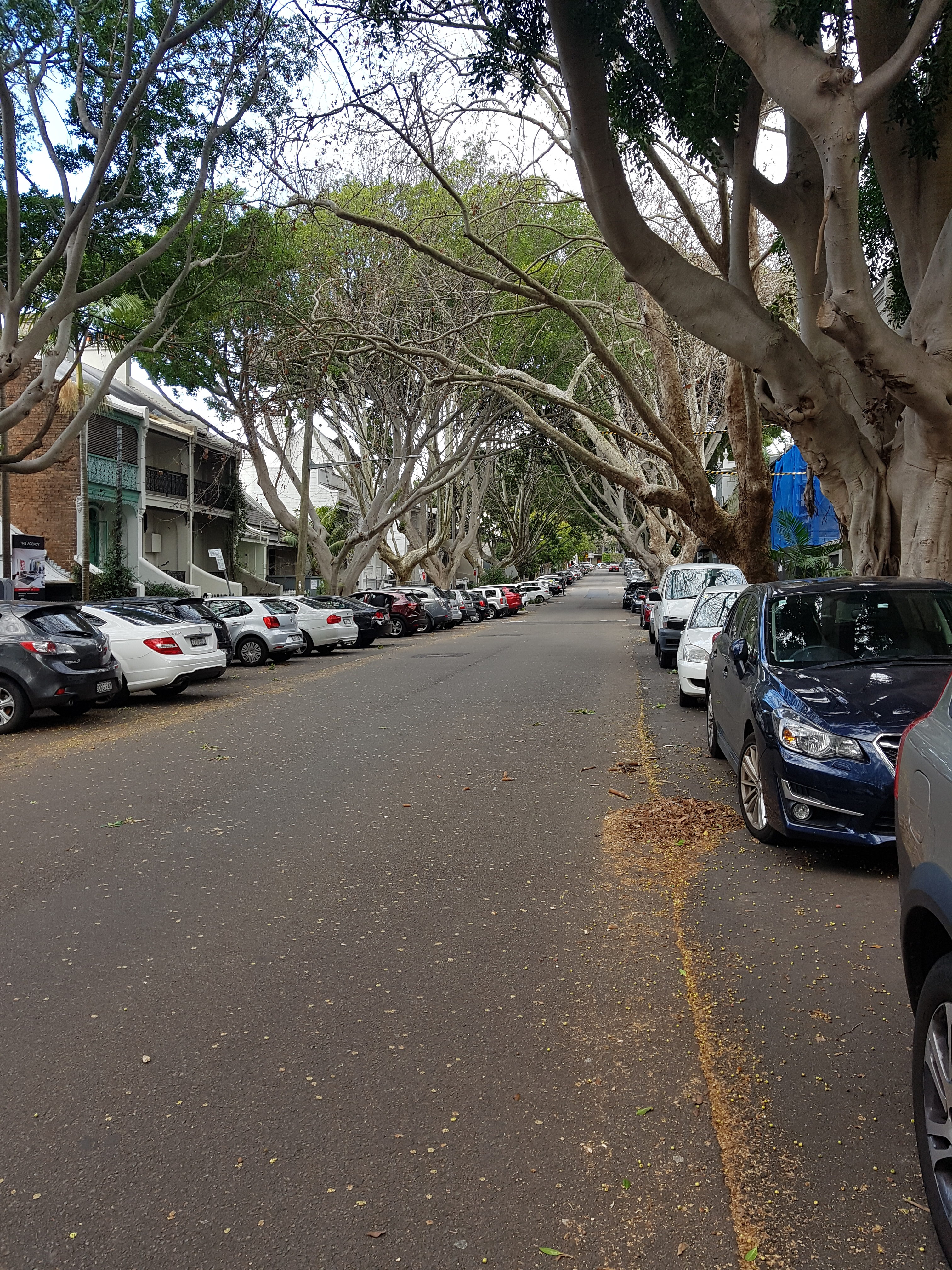 And a somewhat wintery vibe in my typical back street Paddington walk – which is generally quite a deserted walk save for the odd dog walking local. 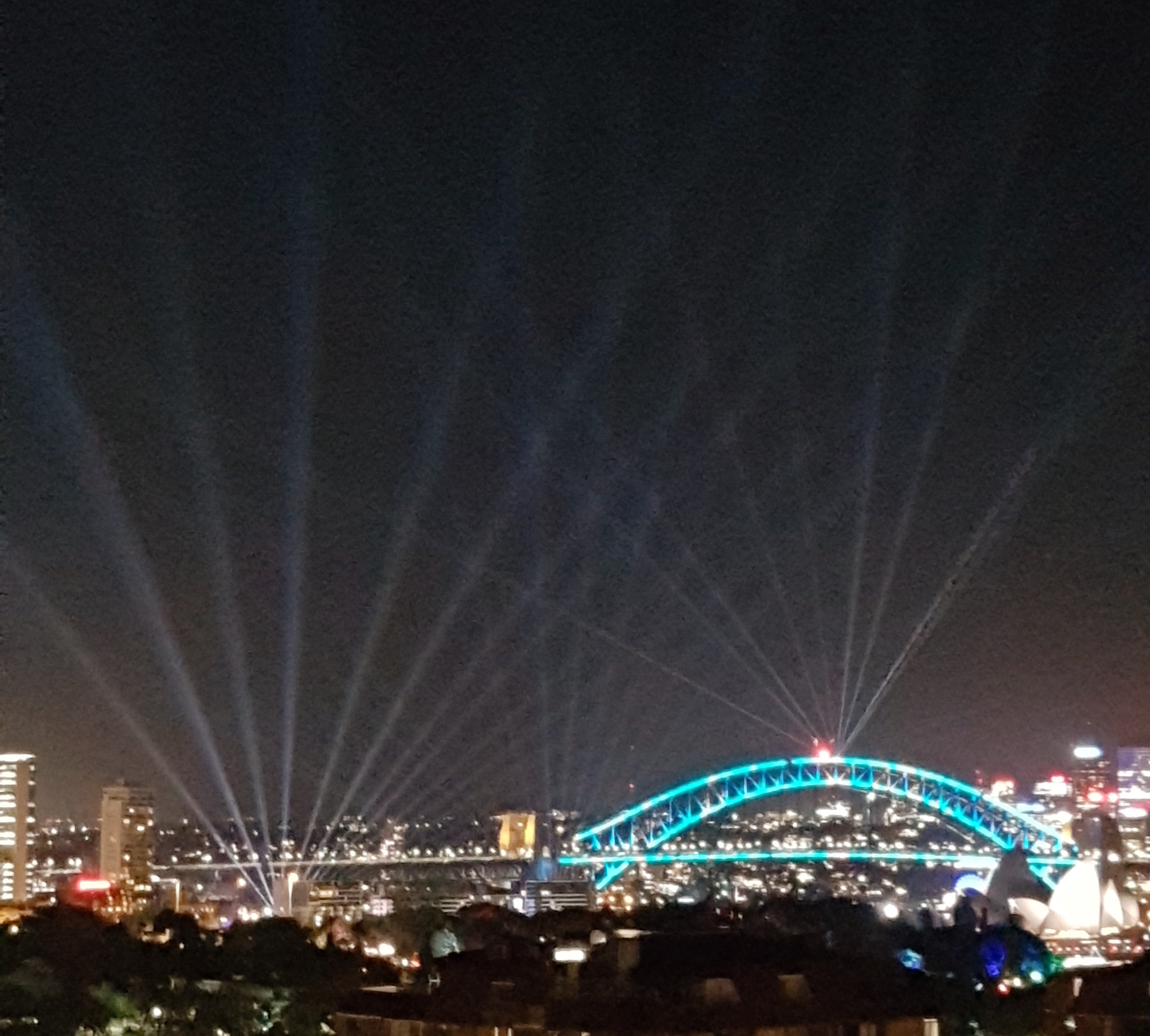 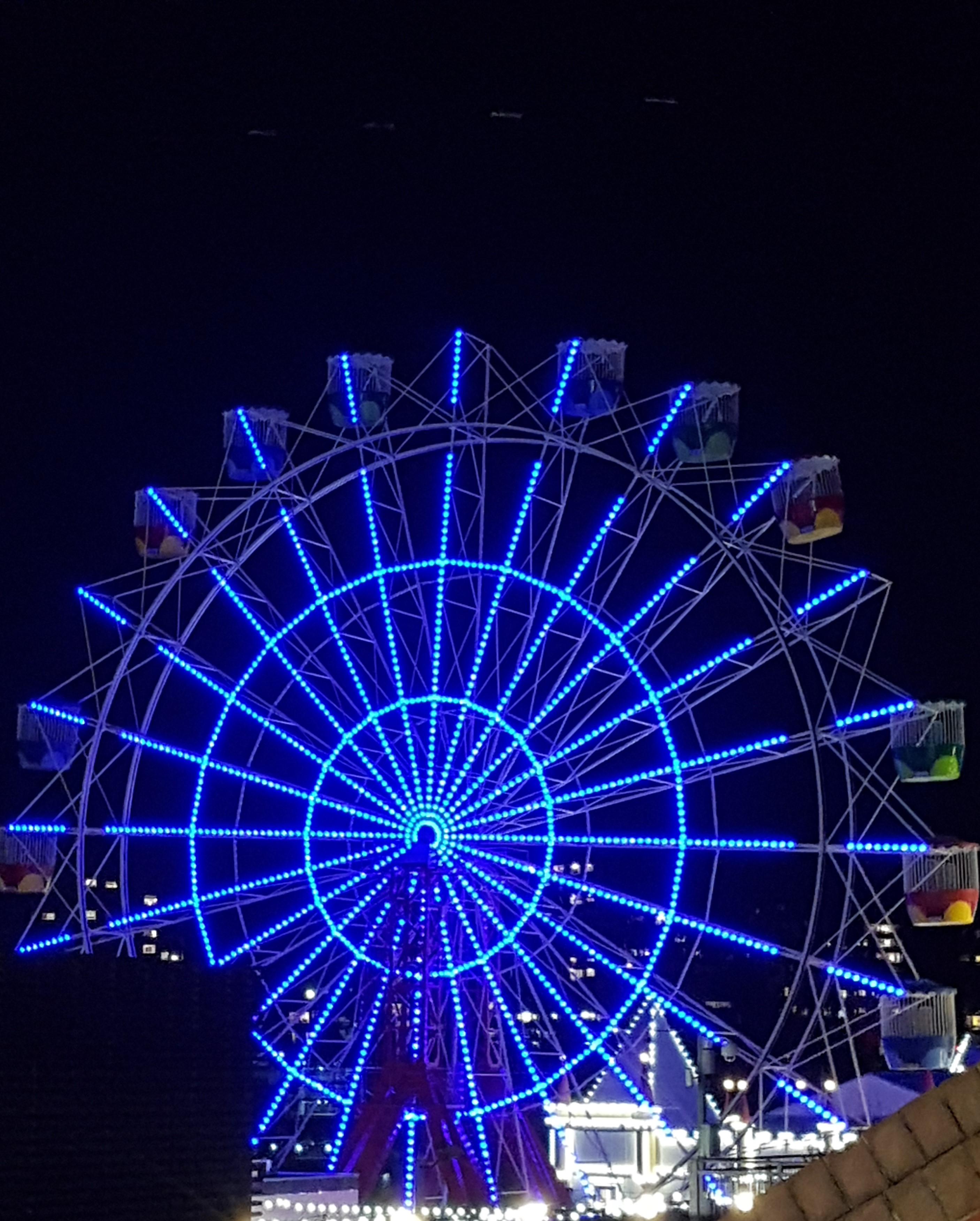 I made my way down to the Harbour yesterday to confirm the best theory for the Bridge problem – which is that it all depends on the angle at which you are looking at the Bridge…  no need to be concerned that some working party for Bridge Climb has re-engineered things to suit themselves!

So here is the photo I took which confirms the best theory – for which a number of people have to take the prize. 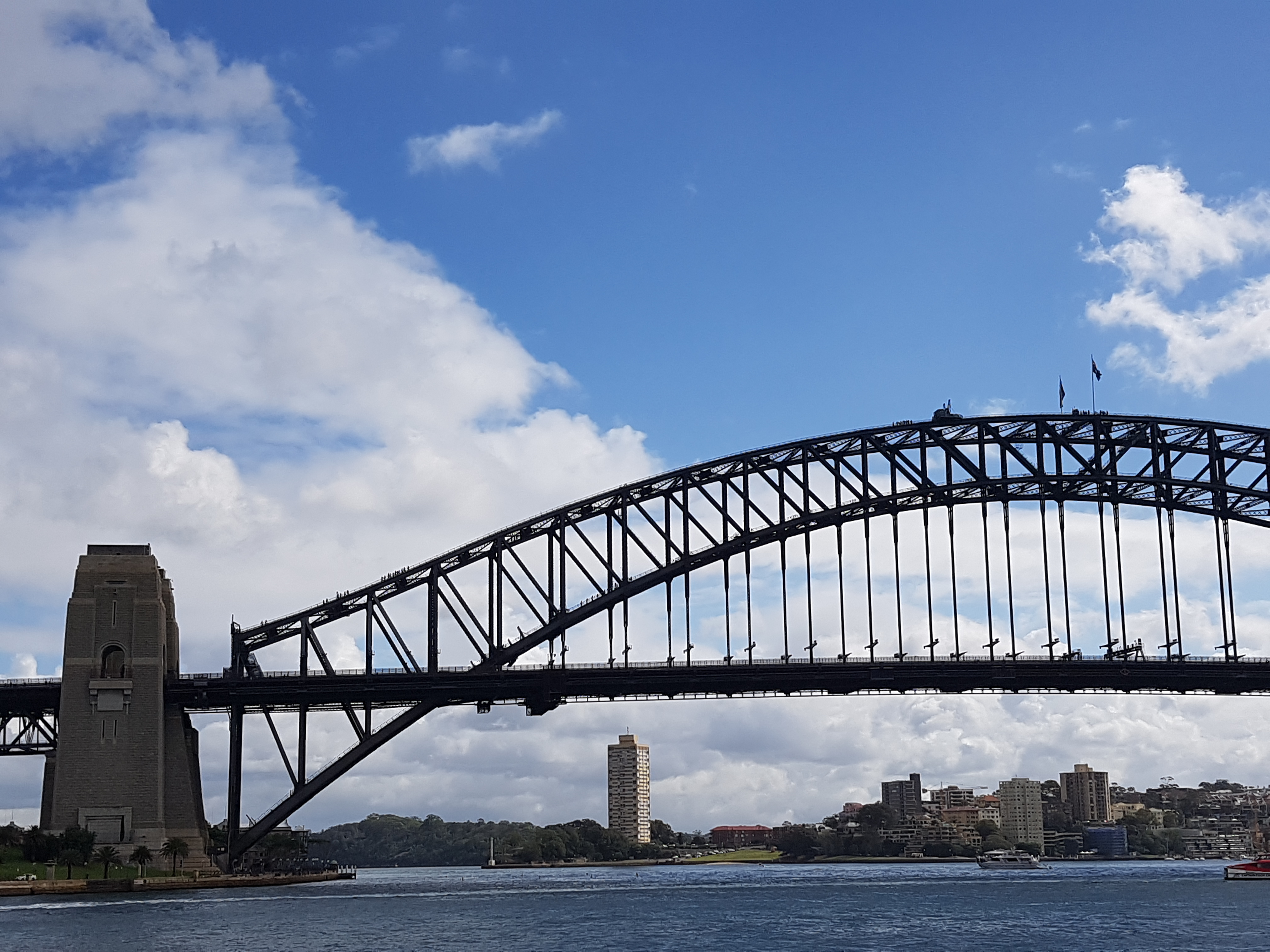 I took this photo at the Opera House and got a bit distracted by the way the great stone ends of the bridge do not actually connect to the structure.  Although I have long forgotten where I read this, my understanding is that the stone structures were never part of the original design.  They were added on after an objection was raised that the Bridge-using public would be too uncomfortable seeing the bare steel structure without some “grounding” monolithic book ends attached.  So back in the day the Bridge’s engineering was regarded as too radical for the average punter.   My only lament is that the ends aren’t clad with Sydney sandstone instead of a grey granite.

But on this subject curiously I have heard a similar story about perceptions of the Anzac Bridge.   For many years the suspension cables of the Bridge were adorned by some diagonally attached wires which had apparently had been added to the structure to “reassure” Bridge users that the cables were not unstable or too light.  The underwires were totally unnecessary, just put there for “effect”.

I have not much else to report this week, save I have bought a small piece of scaffolding (with adjustable legs for working on slopes) and did a special trip to ferry this new prize down to the country.  Once it is in action on the little construction project there I will report back with a photo.

So the only other photo for this week is a picture of the suspenders on my new lingerie – which the label describes as “Ruby” coloured.  One way to welcome in the Autumn. 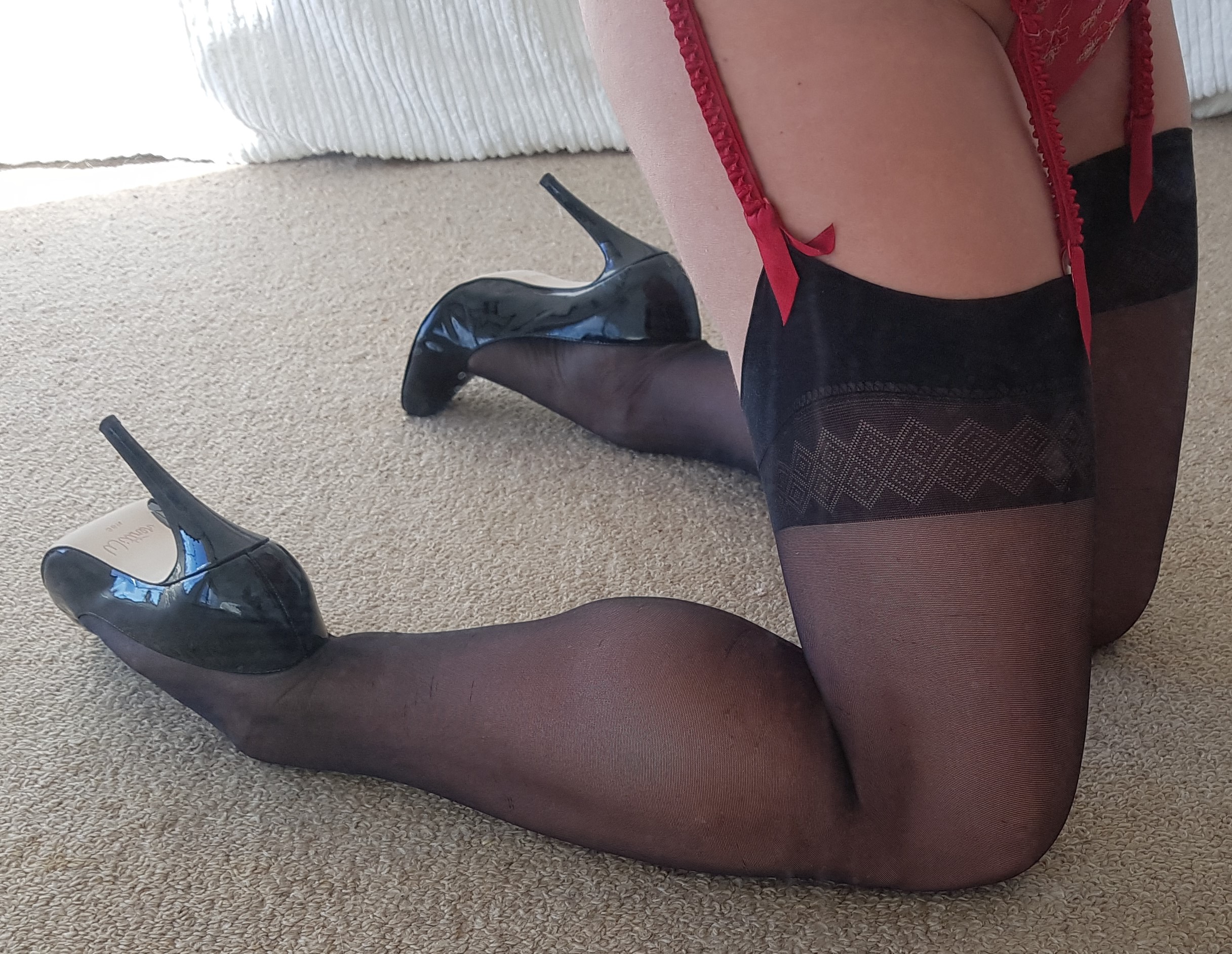 PS a picture of a more golden and grey Autumn from the balcony: 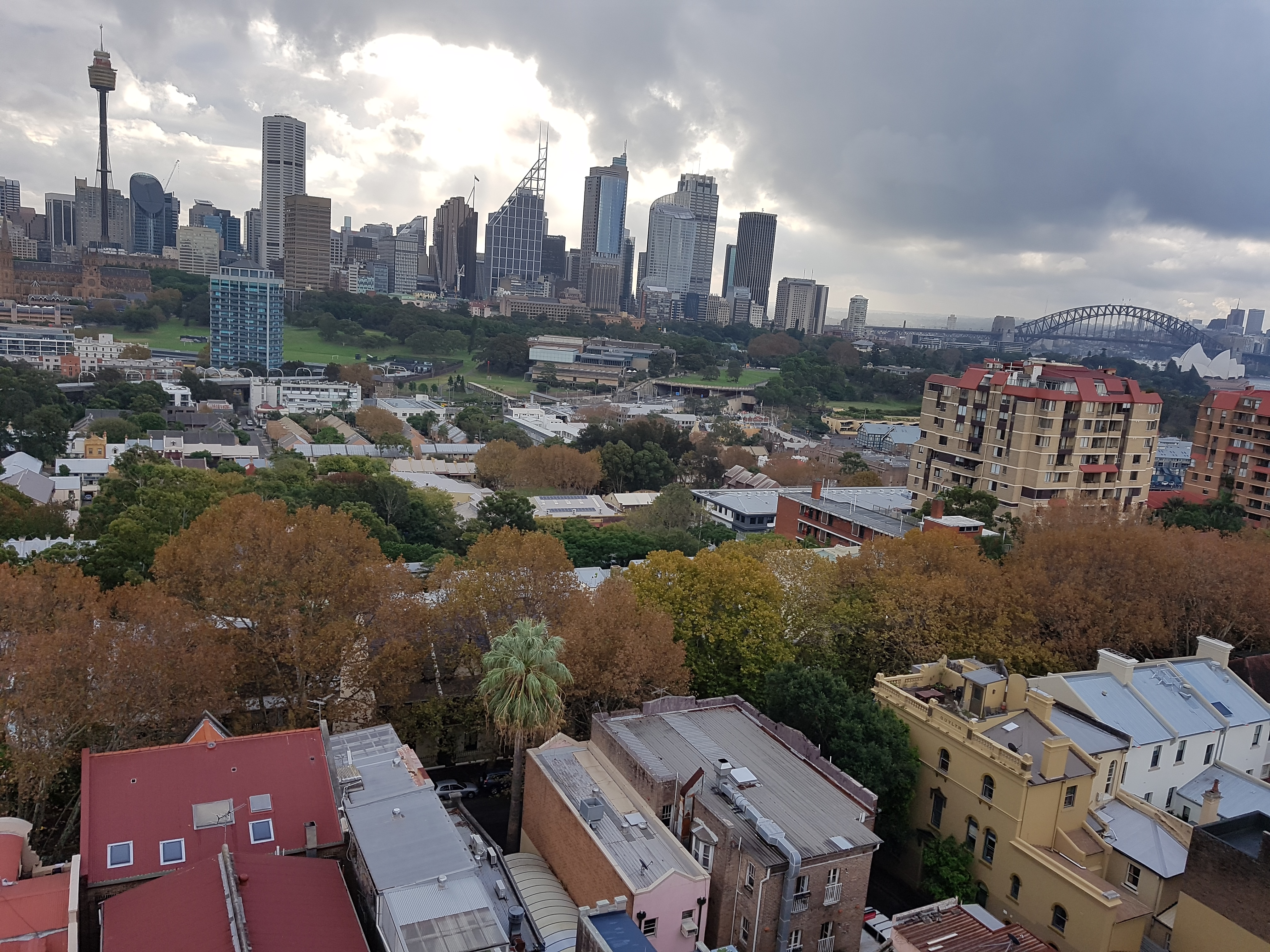 So my experiences in recent travels to Canberra were a little mixed and it’s worth my while taking time out to say something on this.  I had a new client in Canberra very annoyed that I had to postpone our meeting for health reasons.  His response was to tell me he would blacken my name on whatever escort related forum he was involved in.  This, despite my having offered to massively discount my fee for the next meeting to make up for the inconvenience of the postponement.  (This offer was accepted graciously by other postponed clients I might say.)  So the point of my comments here is to tell you that I can only do this work if I am in the best health.  I have had a lot of issues with health and well being over the last period of time.  So it has not always been easy to balance work and health.  This work is not like a lot of other work, it is much more personal and much more demanding. Fortunately the people I see are OK with this, and I appreciate that.   If you can’t see this then I am not the right person for you.

Back to less taxing matters:  I did a short excursion to another beautiful beach on the eastern suburbs shore line.  This time to  Parsley Bay in Vaucluse.  There are old family photos showing I was brought here as an infant but I have no recollection.  The only thing I recall as a child, is the netted harbour pool at Redleaf Woollahra, a few inlets over from Parsley Bay.  It was a very scary thing to be taken, as a very small person,  to the inky deep end of the harbour pool netted off from the _sharks_ – one cannot quite forget the horror of it!

Here is Parsley Bay, with its footbridge, looking dazzling when I visited:

And this image goes some way to showing that lovely emerald green the harbour goes.  The shadows have a violet touch when they fall on the green: 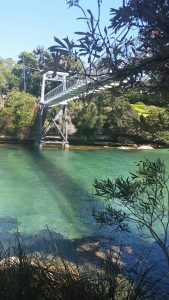 And here was also a very senior looking water dragon basking on the sandstone: 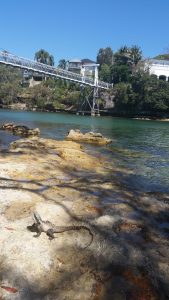 It’s a lovely series of sunny photos to post – especially as today is so grey and rainy by contrast.

yours ever,
MG xx

There is such a lot of vitality in the Chinese New Year celebrations – they go on for a couple of weeks.   The end of the lunar year falls this weekend February 11th and 12th I understand.  So we have now started into the Year of the Rooster in the element of fire, which sounds a bit dramatic and exciting.  The people who are informed about all things Chinese culture say the auspicious year ahead heralds enterprise, fruitfulness, achieving results and realising dreams.  Well  I like the sound of that – given the building endeavours in the country I will be pressing on with this year.

I didn’t see much of the celebrations themselves this year.  However, I did see the red lights decorating the Harbour Bridge and Opera House.  Here is a photo from the balcony in Potts Point. 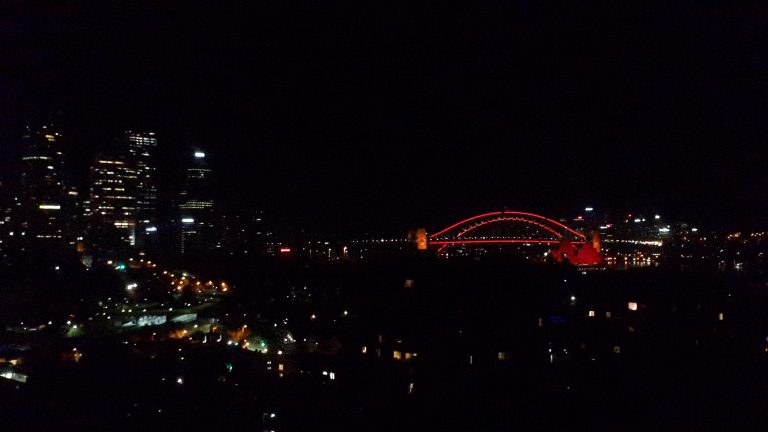 Ed:  A late amendment needs to be made here to include the Goth Rooster in celebrations, a sensationally shiny black soul.  What do you think of this guy? 🙂 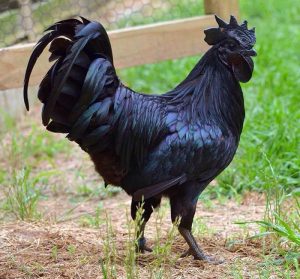 I took this photo on the phone just now Sunday 18th December 2016.  My friends will know this is taken from the balcony here in Potts Point looking across to the City.  I am not a great fireworks person myself but these ones were lovely.  And so we are bringing the year to a close.  I wish you all a very Happy Christmas and New Year and thank you for being such good company.   xx MG 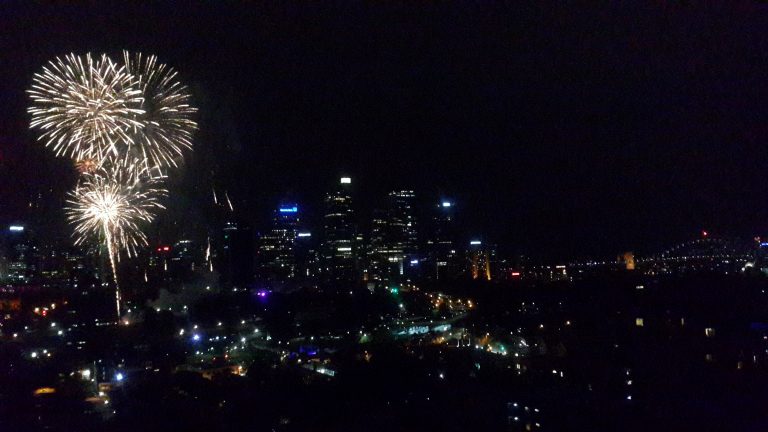