I went up to Oxford Street at lunch time today to see a good friend from the country who was down in Sydney for work. It was another glorious day.  I wish I had worn lighter clothing.   After work was done we strolled along the walkway shaded by trees and high sandstone walls next to the Art School that occupies the grounds of the old goal (the old East Sydney Tech). Then we stopped in at the cafe there which is tucked away inside the walled grounds.

It’s a secret spot.  Here’s the side entrance we used to duck in. 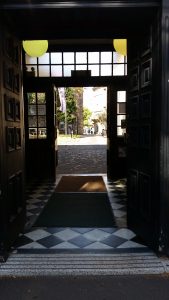 Today there was something unusual at the cafe.  The shiniest, proudest, most engaged with humanity crow I have ever seen. 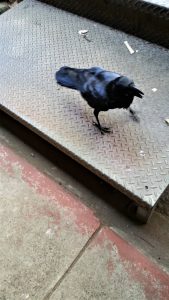 He was actively mining the cafe environment for food and when there was none he got creatively destructive.  I mean, it was not enough to trash the miniature cactus pot plant decorating the cafe table by throwing it onto the floor, it also had to be stabbed a good number of times, back and front, with the beak first. 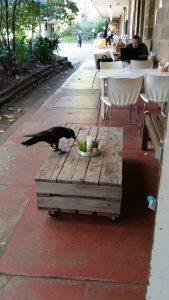 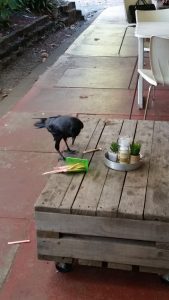 There was a crow commentary carried on throughout.  The noise was so varied and expressive.  At the end of a gravelly phrase when the bird seemed really put out by the food situation the voice would drop to a gurgling growling sometimes sing song series of notes.  This bird must have learnt to speak this way from interacting with a  human or human family. What a forceful presence!  Completely dominating his environment with noise and movement, constant enquiry  and fearless interaction with people.

My country friend observed maybe the crow was the ghost of some former inmate, a guy whose death had never been avenged, who had been knocked off by Roger Rogerson back in the day when Rogerson did time in Darlinghurst Goal.  So the crow persists.  Unweary cipher. 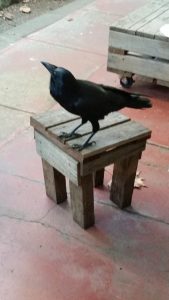 from the David Attenborough school of natural history, Darlinghurst division, MG
signing out for the evening,