These are shots from the other side.
There is more (with less) when you text for Free Range MG.

There were a couple of other photos from the forest adventure, so I am posting them as well.  Next we might do flowers in the field, swimming in the river…

Yes, now I can see Norman Lindsay’s forest nudes in these pictures too, thank you Mr Moss for pointing that out 🙂

Also PS I owe an apology to subscribers to the Letters from America. I have had some issues with my MG email account. I hope to sort them soon and get back to emailing again.

I’ve just finished my last booking for the time being.

Thank you to all the lovely people who have been in touch and been so supportive. Your continued support makes it possible for me to continue on with my escort adventures. And thanks also to the excellent brave souls who want to try online, cyberspace and down the wires sessions with me. I will figure out some details over the weekend and post them soon.

xx MG
See you on the other side 🙂

It’s probably not quite the right response to our current situation but I was feeling a bit exuberant yesterday afternoon during my Sydney visit, so I posted my cheerful (post cardio) selfie to Twitter.

On a more practical matter, I have sometimes, more often in the past than now, found it tricky to get off to sleep at night, or to get back to sleep when I have woken at 2.00 or 3.00am. The magic for many years was to turn the radio on very softly, usually the overnight service from BBC World. Soft voices just in the mid ground of consciousness often helped me to drift away.

I’ve discovered a wonderful podcast for the going to sleep process so no more BBC World News. The podcast can be found at the following link:

It’s Miette’s Bedtime Story Podcast. She has a gorgeous soft Irish brogue. She has a very light touch and the stories she’s chosen to read – that I’ve listened to so far – are wonderful. When I grow up I want to be Miette. The stories I’ve listened to so far have been James Joyce short stories; as observant as Jane Austen and as poignant and crafted as Katherine Mansfield. All in the loveliest soft Irish accent. I have of course passed out within a short time and then needed to listen to the stories the following day during normal waking hours to get the whole picture.

With the shutdowns happening during the coronavirus crisis many people have had to postpone bookings. This is likely to be the new normal for quite a few months to come.

For people who would like to stay in touch with either sexy chat sessions or access to some wicked videos and more (all in production as I type), I have created a Niteflirt account. You can check out the account as soon as it is approved by the site managers in the next couple of days. (I will post details here). Using the Niteflirt account for a small fee we can speak or you can have access to video and photos.

We can also bypass Niteflirt if you prefer and make our own online or over the wire arrangements directly. It is all good 🙂

Also you can take advantage of a bonus I am offering if it suits you and you think it might help me keep body and soul together during the shutdown time. If you would like to pay in advance for two of your usual sessions – which we will do when we reconvene later in the year, I am happy to offer a third session at that time at no additional fee. I am chuffed to report that one of your number is already doing this and doesn’t even want me to do the bonus meetings. This is very much appreciated. While escort work is very personal and is a genuine pleasure, your glam MG also uses it as a means to do mundane things like paying the bills 🙂 and these unfortunately will not go away just because there is a shutdown.

I have few new photos which I have posted here (and pretty soon I will have a new video too, as soon as I get a moment to edit it).

I have created a separate Gallery for my selfies. I will add a whole lot of them from over the years bit by bit 🙂 and keep adding them as they happen.

This is just a few words on business housekeeping practicalities, scheduling, advertising and so on. It’s way more words than usual and somewhat bla subject matter, but it has to be done.

I mentioned in a post at the end of 2018 that I had a stalker during the year who had really taken the shine off my happy escort life and so I would be doing more outside escort work. Well it is true, all through 2019 I have been more focussed on other things, and if I turned my mind to it (which I tried not to), feeling very flat about the stalker situation.

I never once for a moment even remotely thought that the stalker was anyone who personally knew me. And I certainly never thought it was a client, I just don’t attract anyone like that.

Sure enough my original intuitions were right. It’s just a woman who doesn’t know me at all who has her own serious issues (understatement), it has absolutely nothing to do with my happy life. The police are involved now so I don’t have to worry anymore. Although I have been uncomfortable unlocking the small Twitter account I’ve been keeping, so it just stays locked. Since so few people use Twitter it isn’t a big issue for me.

The practical effect of all this is I am free to do more MG in 2020. But the catch is this: while I was busy focussing on other things last year, I got busy! And I decided to move to my place in the country to focus on my various other ventures from down there. So MG time is restricted again for this year, but it’s for a good reason, not because the stalker has put me off and made me flat, but because it’s all happening :-).

So the long and the short is that I am going to have an evolving routine for being in Sydney. A couple of times a month I will have arrangements to be in Sydney with an incall. I will be staying in my old stomping ground in the Eastern Suburbs. I expect it to become an established routine of a couple of extended stays in Sydney every month. I have already done one off visits and trips outside the routine and that’s fine, I will just need to be organised to meet special requests :-).

The current schedule will be kept on the front page of the website as usual.

So far as advertising goes, I am sorry if I had a link in one of my posts to a Scarlet Blue ad that is no longer active. That’s a bit rude of me! I only ever use Scarlet Blue occasionally so the link has not been active all the time. I am about to put my Gallery page back up on this website though, so you will be able to see whatever images it was I had on the Scarlet Blue directory anyway.

As many of you know from your own experience, I don’t advertise in the mainstream much, I just rely on my website. I have found that perfectly suitable for me. Plus, you would not believe how much people pay for advertising, literally $1000s per month, advertising across up to seven or eight directories and websites. I can’t bring myself to do that. Not only are most of these escorts _not_ getting enough work no matter how hard they advertise (it’s a recession and a flooded market), but they are also working to attract exactly the sort of client (on the whole) I don’t want to see – so more power to them :-).

Also, just one further thing on business practices: my rates. Be aware I keep my rates very reasonable for a number of reasons. One reason for instance is that if I have much higher rates I will attract only the clients who can afford those rates. And that is not the right threshold filter. Those people are not necessarily the the right people for me to see.

OK, so now all that is out of the way, here is a January selfie of me lying around in bed one morning in Sydney after a bushfire evacuation from the country the day before. 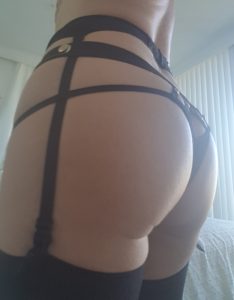