I had a lovely few days this week visiting a little town over the Mountains called Rylstone.   Rylstone is on the road to Mudgee.  I have stayed at  Mudgee before but never Rylstone.   During our stay it was raining heavily so we did not go out almost at all.  Instead we spent most of our time inside our friends’ warehouse-like dwelling,  which was remarkably warm and cosy given its enormous size.  The windows were a wall of north facing glass and we watched farm animals (sheep), and wild animals (kangaroos and galahs), get drenched and little birds (double barred finches), come down to feed during the brief moments when the weather settled.  Our friends were incredibly generous hosts and it was a delight to stay with them.  It was the best adventure in ages.

Here is a photo of double barred finches.  They are tiny and travel in packs (be warned).

One thing I specially liked about the warehouse-converted home owned by the friends we were staying with, is that I got to sleep in a bedroom that was off high up in one corner of the structure.  Basically the bedroom was on the second floor of the structure but there was no second floor as such, there was simply one little eyrie perched up in space which was my bedroom.  And that bedroom, wait for it…. was accessible only by a tiny little windy, wrought iron spiral staircase straight out of a Ronald Searle cartoon. 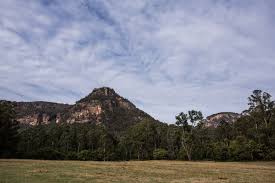 Here are a couple of images of the gorgeous escarpment around Rylstone.  I did not take any photos myself.   It was raining so heavily when I was there  I snuggled up inside instead.

It is a wonderful landscape, close to the Capertee Valley and the Gardens of Stones National Park.

There is a dramatic escarpment.  People say the escarpment is an extension of the Blue Mountains which of course it is, but it looks like something of quite another world rising straight up from the valley flat. 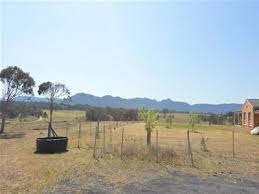 I could spend plenty of time in this area and not get tired of it.

In the town itself we first visited the local Woodfired Bakery.  I met the women working there who were cooking the filling for the pies and preparing the pie casings for baking.  I had a very interesting tour of the oven.  It was huge! 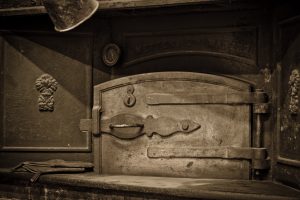 It was beautifully built of biscuit bricks with the oven door in the wall at just above waist height.  The door  fitted onto a slender mouth  framed by a soft arch.  Apparently the oven  is 100 years old.  It was deep, more than the length of a tall man.  I absolutely loved the Bakery (and I am not even into bread or cakes myself).  It was a beautiful piece of history and functional small scale engineering. 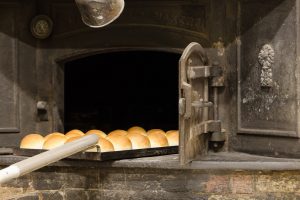 After our visit to the Bakery went up the town’s main street and we passed an old brick church – even older I think than the Bakery.   There was freestanding sign outside with the name of the church St Malachy’s.  My friend’s father was with us and I caught his eye.  Is it possible to exchange arched eyebrows?  I think he might have been thinking the same thing as I was.    Why would anyone call their church St Malachy’s?  After all the pronunciation is unmistakably the same as the word “malarky”.   And malarky  is the Irish world for nonsense, a far fetched tale, a fantasy.   That would have to be a win for Christopher Hitchens.

Later I thought I should google this St Malachy, it was simply too strange and I had never heard a church named after a St Malachy.   And the Wikipedia entry was great.  It turns out  the word “malarky” is derived from the name of a person who was  St Malachy (a 12thC  Irish saint).  In the 16thC a set of documents known as the Prophecy of the Popes was attributed to the long dead saint.  The prophecy was to the effect that after 112 Popes had served their terms as pope then the Day of Judgment would come about.  The prophecies in the documents were regarded as complete nonsense.   By the time they had been discredited the name had stuck: they were “malarky”.  The real saint was never himself involved in the fraud, but his name is tainted now so unless you are looking for wicked irony it can’t be a great name for a church.

We also visited the pub which is called the Globe and is a very attractive pub.  In the dining room there were a good number of well behaved children, it being school holidays (and well, possibly a minor miracle as I really do not recall children being so well behaved back in the day).

Then we had lunch at the Dumplings House owned and operated by a very capable and likeable Chinese woman Na Lan.  They were very good dumplings and completely authentic.  I could not have had better in the Cross (where there are three good dumplings houses).