This photo is a bit out of focus and overexposed but your glamorous aunt is doing real yoga.  There are some lovely spots just off the highway to Canberra.  This is one of them, at a rest area commemorating one of the bravest second war VCs, Diver Derrick VC.

In the Iliad there are one or two passages that changed the way I looked at poplars. Everyone knows I love trees. I already loved poplars. But now I love them even more. I have included one of the passages from Homer, which is about the death of a Trojan named Simoeisios. It follows a standard formula: the fall of the warrior in the battle, his precise wound, the story of his humanity, the metaphor.

There Telamonian Ajax
struck down the son of
Anthemion
Simoeisios in his stripling’s
beauty, whom once his
mother
descending from Ida bore
beside the banks of
Simoeis
when she had followed her
father and mother to tend
the sheepflocks.
Therefore they called him
Simoeisios; but he could
not
render again the care of his
dear parents; he was
short-lived,
beaten down beneath the
spear of high-hearted
Ajax,
who struck him as he first
came forward beside the
nipple
of the right breast, and the
bronze spearhead drove
clean through the
shoulder.
He dropped then to the
ground in the dust, like
some black poplar,
which in the land low-lying
about a great marsh grows
smooth trimmed yet with
branches growing at the
uttermost tree-top:
one whom a man, a maker
of chariots, fells with the
shining
iron, to bend into a wheel
for a fine-wrought chariot,
and the tree lies hardening
by the banks of a river.
Such was Anthemion’s son
Simoeisios, whom
illustrious
Ajax killed.

xx from MG
and from MG’s bottom:

Thank you my friend Michael MA60 for sending me the link to the lovely but mournful Kol Nidrei, which I have added here: https://www.youtube.com/watch?v=eYdXu2MH6YE

It’s suitably intense for so many people’s lives right now.

I am sending you in return Ravel’s Kaddisch sung by the beautiful Frederica Von Stade. I realise it’s actually quite an old recording now, from 1981. There are other recordings by other great singers: Jessye Norman, Cecilia Bartoli, but the von Stade is so lean and spare and penetrating, it is the best I think, the most oriental. She has the touch, not too sentimental or fruity, for the haunting Hebrew song of mourning. https://www.youtube.com/watch?v=uQFwDgBjpbo

In the background of one of my selfies I must have included the part of my loungeroom wall that has a scroll of Chinese characters hanging on it.   I say this because I had the pleasure of meeting a man who had taken the time to get a translation before we met.  He had read the characters from one of my photos.  I also had the pleasure of hearing from him an interpretation of the words on the scroll which was a totally new to me and quite different from any interpretation I had thought of.

The scroll itself I had made about 4 or 5 years ago.  I had found a beautiful Zen saying entitled Subtlety.  I searched about and discovered a Chinese scholar who worked at Macquarie University who was skilled in calligraphy.  He agreed to do the calligraphy.  He also recommended a man who could mount the work in traditional Chinese paper and fabric form.  So the calligraphy was done and the work taken to the scroll maker, and in time I came to own this lovely thing: 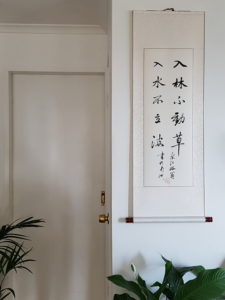 Entering the forest, he moves not the grass;

Entering the water, he makes not a ripple.

I had, and still do have, a fairly literal interpretation in mind.  But my new friend had another interpretation, thus:  when you enter the forest you are so small in such a great expansive world inevitably your presence does not create any special disturbance.  And the same with water.  When you merge with the ocean you do not disturb the huge body of water, you become part of it.  You cannot disturb it.  And following on from this my new friend drew another parallel – the difference between the city and the village.  In the city your conduct will not be noticed but in the village everything will be the subject of judgment and comment.  And we both agreed how grateful we were that we lived in the city.  In the village we would not be so free to meet.

PS On another subject altogether, I give you this week’s before shot: 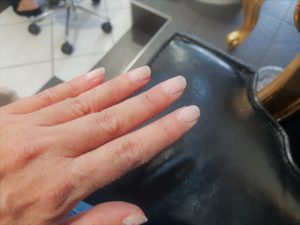 and the (glamorous) after shot: 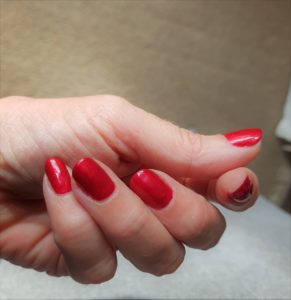 To my gentlemen friends who really like poetry, thank you for the poems you recommend to me and here is one in return: a haiku translated by the Beat Generation poet Ken Rexroth

I wish I were close
to you as the wet skirt of
a salt girl to her body.
I think of you always.